Ms. Mette Frederiksen, Prime Minister of Denmark has been leading the collective efforts for Denmark to reduce 70% of its emission of green house gases by 2030. The Climate Act with such a target is expected to be passed in February. It is quite an ambitious target. 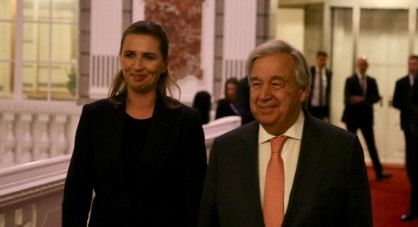 （Prime Minister Frederiksen and UN Secretary General Guterres in Copenhagen in October 2019,
photo: Prime Minister’s office）
Japan and Denmark have collaborated vigorously to address the global warming.  In 1997 Japan hosted the UNCCC COP in Kyoto and in 2009 Denmark presides the COP in Copenhagen.  For nearly 30 years in Greenland, the experts from both countries have continued joint research and data collection related to climate change in the Arctic region.  In 2014, Mitsubishi Heavy Industry and Vestas jointly started developing the world largest offshore wind power generators.  On top of that, Japan hosted the G20 Summit in Osaka last year and deepened the discussion on climate change, environment and energy among the leaders. 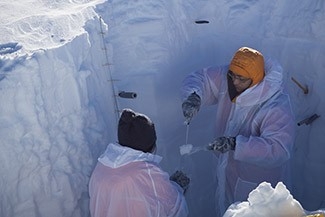 At the COP 25 in Spain, Mr. Shinjro Koizumi, Minister of Environment said “Japan is taking concrete actions towards decarbonization and delivering the results.  We are fully committed and Japan will deliver.”  He referred to the increasing number of cities and citizens who declared Zero Carbon City by 2050.  As of now, 28 cities and 48 million Japanese citizens out of about 120 million have expressed the intention.  Mr. Dan Jørgensen, Minister for Climate, Energy and Utility shared Denmark’s initiatives about the use of renewable energy such as wind power etc.   I am aware of various assessments on the results of COP 25.  It is crystal clear that both Denmark and Japan are making serious efforts to the common end.

(Photo: UNFCCC)
3 Start from what one can do

In such a short period of time since my arrival in October to Denmark, I am much grateful for the opportunities to exchange views preliminary with the Danish decision makers and business leaders on how Japan and Denmark can further collaborate on climate change.  My gratitude goes to Mr. Jeppe Kofod, Minister for Foreign Affairs, Mr. Lars Gert Lose, Permanent Secretary, and the top diplomats of the Foreign Ministry, Mr. Jean-Charles Ellermann Kingombe, Permanent Undersecretary of Prime Minister’s office, Mr. Nils Agerhus, acting Permanent Secretary of the Ministry of Higher Education and Science, Mr. Per Okkels, Permanent Secretary of the Ministry of Health and Senior Citizens and so many other officials from the government and Ms. Anne Steffensen, CEO of Danish Shipping, Ms. Eva Berneke, CEO of KMD,  Mr. Lars Petersen, COO of Biogen, the top management of MHI Vestas Offshore Wind and other Danish colleagues from the private sector and so on.
Our conversations often started with the following same phrase; ”Oh, by the way, we don’t know how to achieve 70% reduction specifically.”  I was bewildered when I heard that kind of statement for the first time.  However, the initial statement was always followed by deeper explanation of the ongoing serious efforts to tackle the problem.  And at the end of the day, our talk was always concluded by the expression of mutual expectation for further collaboration between Denmark and Japan. 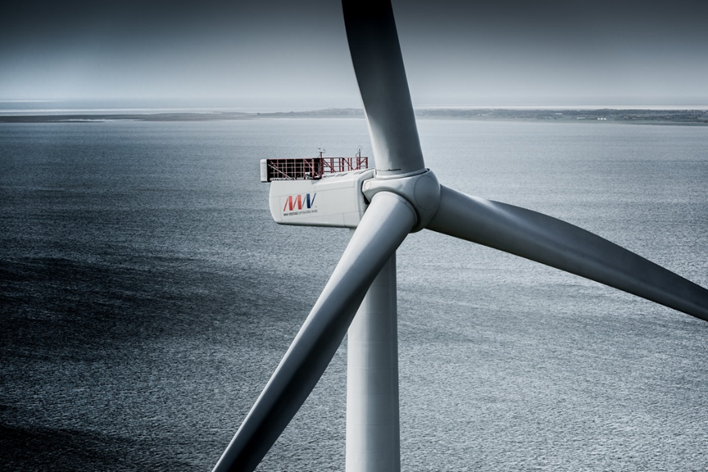 （Offshore wind power generator, photo: MHI Vestas Offshore Wind）
Japan has been faced with quite an important agenda, the recovery and reconstruction from the Great East Japan Earthquake in 2011.  And it has been in this context where Japan squarely discussed and revised its mid-term energy mix.  We are determined to carry on our joint efforts with Denmark to seriously address the climate change, making best use of environment technologies and green finance and so on.  When the Danish Ambassador Taksøe-Jensen came back to Copenhagen in November, he told me that the Embassy in Tokyo had been appointed as one of the 15 climate change embassies in the world and he had begun to do everything the embassy could do to their utmost.  Yes, I totally agree and we are ready to work with him even further.

Let me conclude here this time.  In Japan, the zodiac tells that 2020 is the year of mice, supposedly a very productive year.  I look forward to meeting and talking with you someday soon.