2020/4/14
At the outset, I would like to express my sense of solidarity for the ongoing efforts to overcome Covid-19 by Denmark, Japan and the rest of the world. More than a month has passed since Denmark started the restrictions to protect people from Covid-19 by shutting the border, asking people to avoid using public transportation and closing commercial facilities and so on. I sincerely wish safety and security of everyone.

On 2 April, Prime Minister Mette FREDERIKSEN posted a message in her facebook on “Thoughts on art, culture and spiritual life- and all that the eye cannot see”. I understand that PM is asking us if we would agree that during such difficult time, we could appreciate such invisible values. Since I fully agree with her view, let me quote part of the message; “(following the words to praise flourishing culture in new ways such as common songs digitally or from balcony to balcony, theater on You Tube and so on) We need the living word in the folk high schools. …We need the art to pick up on our experiences and our quest to understand life and ourselves as human beings. In a difficult time, we need comfort, hope and reflection. Perhaps this is the common realization that we can take with us on the other side of the corona? In these days and weeks we are fighting for human life – it gives new attention to what makes life meaning. … In a difficult time, we see what we owe to each other. I’m sure that is why the community mind is growing in strength.”

What do you think about her message?

2. Cultural exchanges between Japan and Denmark

Now going back to the history between Japan and Denmark up to 18th to 23rd of April in 1873, when Mr. Tomomi IWAKURA, Ambassador Extraordinary and Plenipotentiary, and Minister of the Government of Japan led the mission to Denmark. The year is recognized in our history as the beginning of substantial exchanges of peoples between Denmark and Japan.

The reasons often mentioned why Japan chose Denmark as one of the destinations for the mission were as follows; Firstly, Denmark was the 11th and last country with which the previous Tokugawa Government (1603-1868) concluded in 1867 the Treaty of Friendship, Commerce and Navigation, which already required the amendments from the viewpoint of Japan. Secondly, the mission aimed to learn from Denmark its governance of the nation because Denmark was so competent in governing the country while managing the relations with the surrounding big powers in Europe. 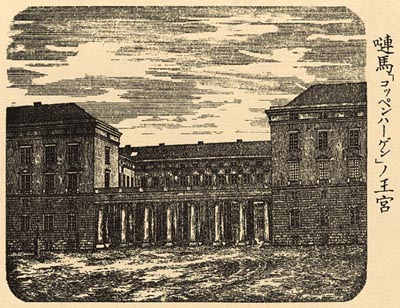 (Christiansborg Palace, from “Diary of the visits to the US and Europe” 1878 source: http://www.nichibun.ac.jp/graphicversion/dbase/kairan/index.html)
The report of the mission, “Diary of the visits to the United States of America and Europe” described positively the people of Denmark as follows; “Everyone is good and simple, dedicates to one’s profession and avoids getting indulged into vanity and luxury. In its characteristic, they are the best in Europe.”

The diary further went on to observe the situation of Denmark after the defeat against Prussia and Austria in 1864 and praised the positive sentiments and strong spirit of the Danes despite such loss as below; “a small country in Europe which manages to maintain its independence has its very strong soldiers… and the minds of every one of its people are so resilient.” 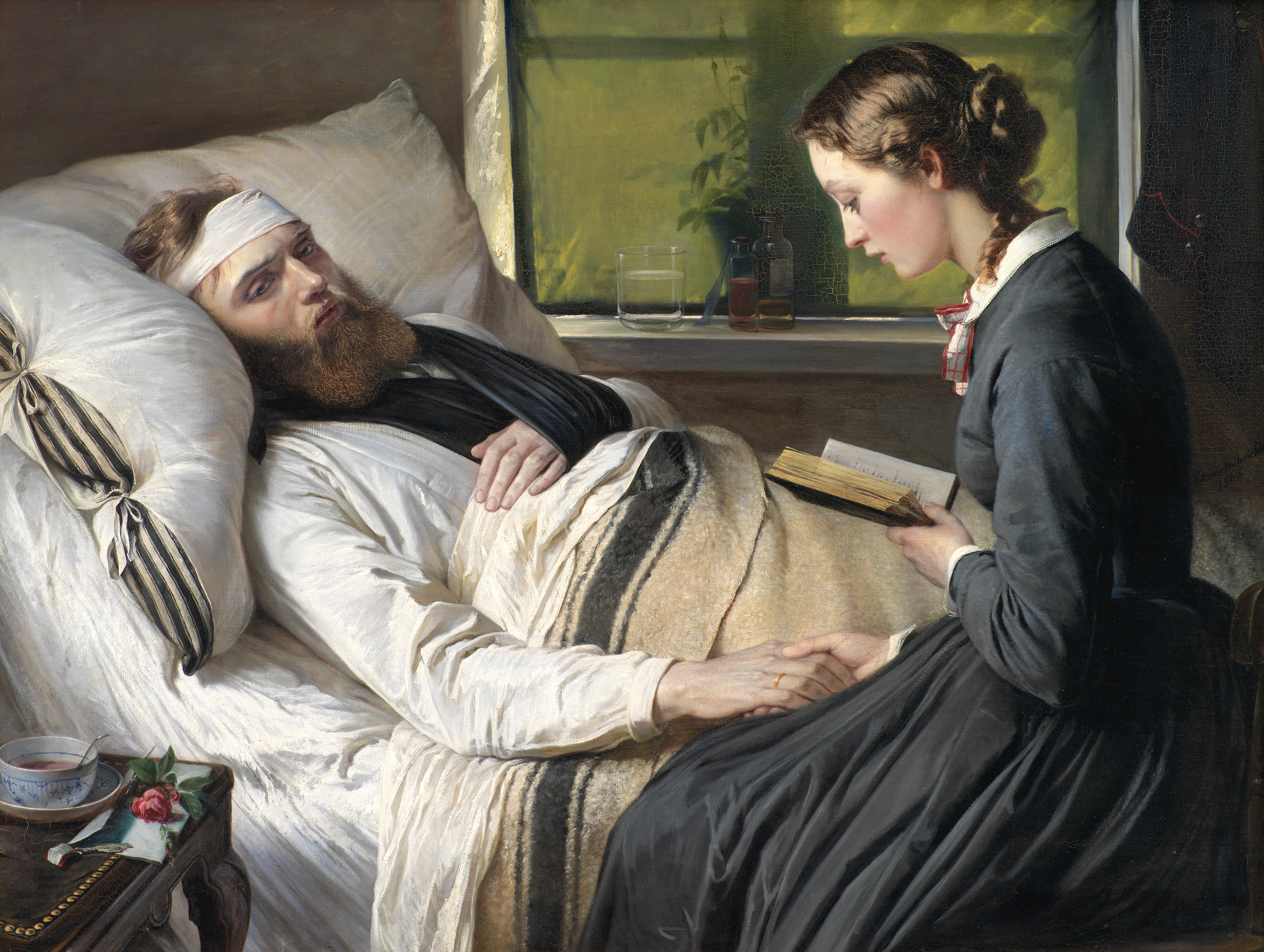 Let us revisit the message of PM FREDERIKSEN. It says ” in a difficult time, we see what we owe to each other. I’m sure that is why the community mind is growing in strength.” I think that this statement dose reflect what Denmark is as a nation and how the people live and address Covid-19. This is the spirit of Denmark, which has been recognized not only by the IWAKURA mission, but also by Mr. Kanzo UCHIMURA (1861-1930) who made a famous lecture in 1911 in Japan on “Story of a country called Denmark”, and by Mr. Shigeyoshi MATSUMAE (1901-1991), the founder of Tokai University, who introduced the merits of Folk High School of Denmark to Japan. And I am one of the witnesses of this Danish spirituality being firmly succeeded today.

Let us consider “what makes life meaning” mentioned by PM FREDERIKSEN from a slightly different perspective. One way to defeat a life-threatening infectious disease is to cure it by drugs. On 28 March, Prime Minister Shinzo ABE of Japan stated that “Japan will accelerate the development of effective drugs and vaccines, mobilizing wisdom of the world.” Following the statement, on 30 March, PM ABE had the telephone conversation with Dr. Tedros Adhanom Ghebreyesus, Director General of World Health Organization, saying that “Japan intends to proceed with clinical researches and cooperate with countries who wish to do so.” The United Nations Project Services (UNOPS) located in the UN City in Copenhagen in consultation with WHO is delivering Avigan in collaboration with Japan to the countries which requested the drug. 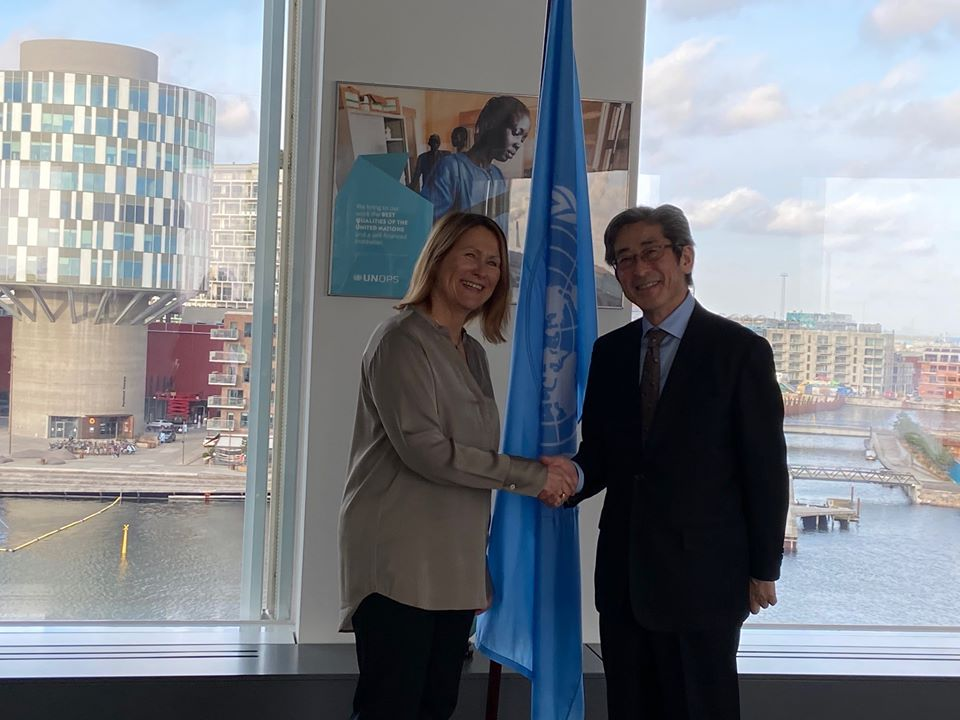 (Ms. Grete FAREMO, Executive Director, UNOPS and the Ambassador of Japan on 16 January 2020)
4. Never extinguish the light of culture

Five days before PM FREDERIKSEN’s message on art, culture and spiritual life, PM ABE of Japan made his statement in resonant with her; “in such difficult time, we need power of culture, art and sports which can comfort minds of human being. We should never extinguish the light of culture despite any difficulties 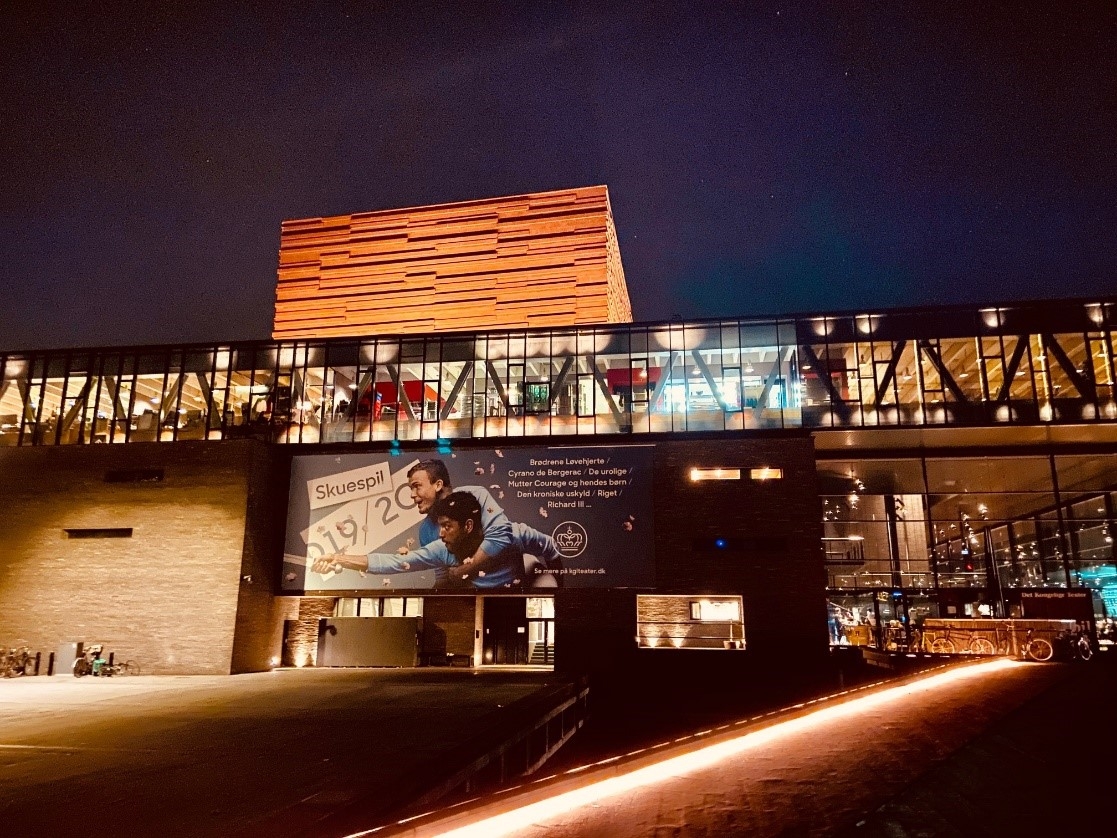 (Royal Play House in Copenhagen)
I have been assigned to the Kingdom of Denmark for half a year and fortunate enough to meet those excellent people who are engaged in exchanges of culture, art, architecture, music, design, sports, Budo(Japanese martial arts) and so on. I am grateful for their performances, talks, publications, YouTube and other opportunities shared with me. Those who are engaged in culture are trying to reach out and brighten the world through available venues including digital communications, despite frustration caused by the present limitations.

Such difficulty is endured by so many people of other professions such as health care workers in the front line, patients who try to recover from Covid-19, businesspersons who aim to recover from this shock, and athletes who resume preparations for the postponed Tokyo Olympic and Paralympic Games. We are eagerly waiting for the complete return of normal activities of them. I am one of them and willing to play my own part even if it would be a small one. 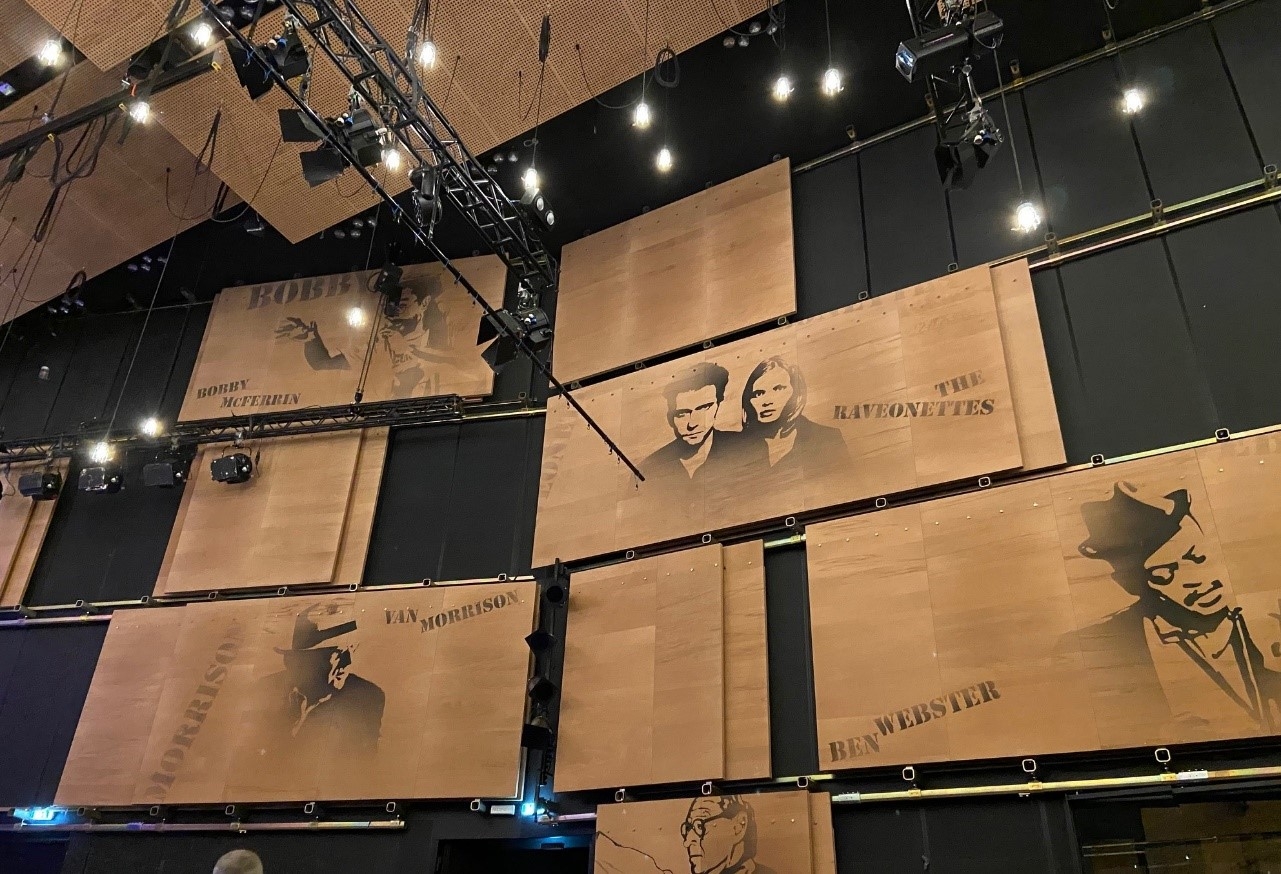 (The studio at DR Concert Hall in Copenhagen)
“Living word” which PM FREDERIKSEN quoted seems to derive from the concept claimed by N.F.S. GRUNDTVIG(1783-1872), the Danish Farther of modern spirituality of Denmark. The norm has affected Japanese philosophers as well. In 1911, Mr. Kanzo UCHIMURA concluded his lecture on “A story of the country called Denmark”, which praised the recovery of Denmark after 1864 war against Prussia and Austria by saying “it would be out of question if you despise and ignore a belief at a time of huge danger faced by a country.”

I also believe in the living word and keep our fight against Covid-19 because there is no endless night without dawn. During the past one month’s stay at home restrictions, I have reflected upon what are missing in my deeds and thoughts and end up with this piece.

Thank you for your time and see you next month. 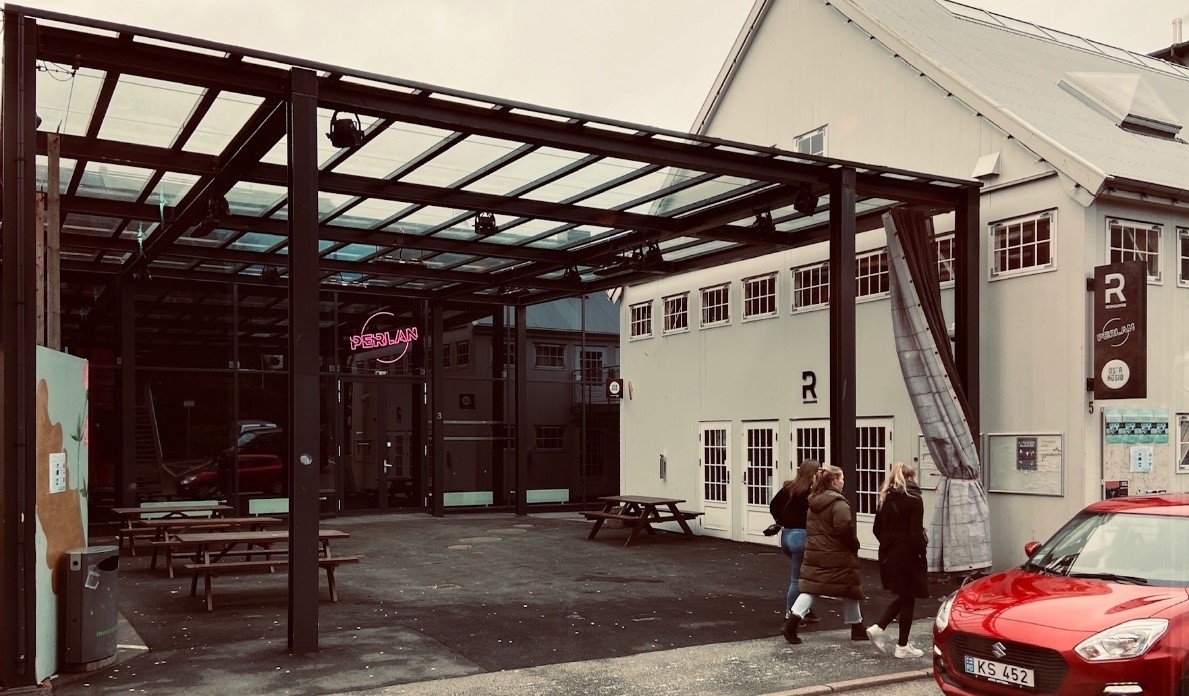 Embassy of Japan to the Kingdom of Denmark