Japan, Denmark and the EU

I begin with a story some years ago this time.  In 2002, I witnessed the Danish EU presidency achieving through delicate negotiations the historic agreement on the fifth enlargement under Prime Minister Anders Fogh Rasmussen.  At that time, I worked at the Mission of Japan to the EU in Brussels.  The DR made an eye-opening documentary describing the negotiation, through which Denmark under the leadership of PM A. F. Rasmussen coordinated 25 different positions among the member states and the candidate countries.  It was a historic moment when the enlargement of EU from 15 to 25 member states was decided. 
There is a post called “Antici” (named after a former Italian diplomat, Mr. Paolo Massimo Antici) at each permanent representation of the EU member state.  Antici supports his/her Ambassador and prepare for the European Council.  At that time, they were diplomats at the level of Counselor, and most of them were in the thirties to forties.  The busiest Antici was always that of the Presidency.  Mr. Thomas Ahrenkiel was then-Antici of the kingdom of Denmark (present Permanent Secretary of Ministry of Defence).  From time to time, Mr. Ahrenkiel gave me, a Japanese diplomat, precious opportunities to exchange views in the middle of the most hectic time of Presidency.

After some years, in 2012, I found myself working at the Mission of Japan to the EU again.  It was the initial period of the negotiation for the Japan EU Economic Partnership Agreement/Free Trade Agreement, which entered into force in 2019.  Then again, I saw the Danish diplomats of the permanent representation to the EU acting vigorously for an early conclusion of the negotiation and thus giving a huge impetus to accelerate the negotiation. 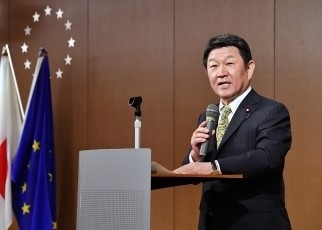 (In February 2020, Mr. Toshimitsu Motegi, Foreign Minister of Japan made a speech on an anniversary of the effectuation of Japan EU EPA. Photo: HP of MOFA)

Looking back the roles played by Denmark during the 5th enlargement and the Japan EU EPA/FTA negotiations, I am convinced that Denmark might not be a big country, however she is a tough player who navigates the overall course of future of EU.  The tradition has been not only succeeded but enhanced nowadays.

2.  Cooperation among Japan, Denmark and the EU over COVID-19

Here are two recent cases which, I assume, show the remarkable clouts that Denmark must have demonstrated in her relations with EU and Japan, tackling the challenges of COVID-19.

On 26 May, the Japan-EU Leaders Video Teleconference was held.  Mr. Shinzo Abe, Prime Minister of Japan, Mr. Charles Michel, President of European Council and Dr. Ursula von der Leyen, President of the European Commission had a constructive exchange of views on how to address the COVID-19 and so on. 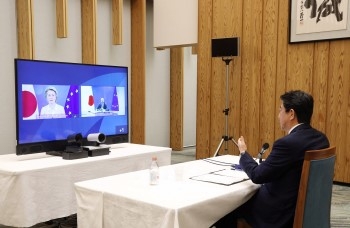 At the outset, the joint press release says that ”they recognized that a global solidarity, cooperation and effective multilateralism are required more than ever to defeat the virus”. Then, it confirms Japan and EU a) welcome WHO’s “impartial, independent and comprehensive evaluation” on the experience and lessons of COVID-19, b) commit to global collaboration to make medicines and vaccines available to all at an affordable price, and c) ensure decarbonization/green transition, digital transformation will be a part of the recovery strategy.

The leaders also discussed the geopolitical implications of COVID-19 at the teleconference. The joint press release refers that the leaders are determined to a) uphold the rules-based international order, b) strengthen cooperation on cybersecurity, countering hybrid threats and others, and c) counter disinformation in accordance with freedom of expression and the rule of law. 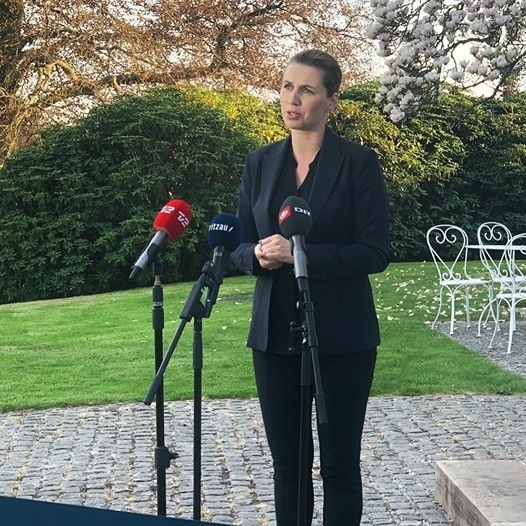 For several weeks before and after the Japan-EU Leaders Video Teleconference, Japan and Denmark had communicated each other through various channels to discuss a) bilateral collaboration over COVID-19 such as clinical research of drug called Avigan, the investment of FUJIFILM Diosynth Biotechnologies in Denmark to double its drug substance manufacturing capacity, some vaccine development business cooperation and so on, b) future of WHO, c) our determination to maintain and strengthen the free trade and to make further use of Japan EU EPA/FTA to that end, d) active approach to climate change issues despite difficulties brought about by COVID-19 and so on.

Between Japan and Denmark, it happens not only this time but often that bilateral cooperation is promoted in parallel with that through the EU.  Because it can lead to further effects in both fronts by synergy. 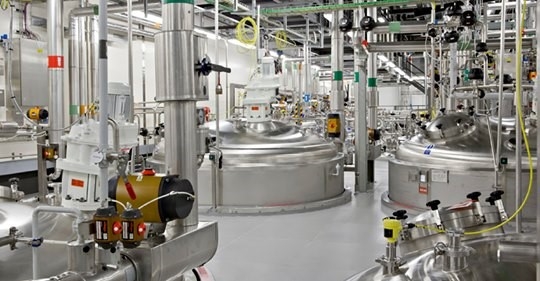 If we read the main points of the Japan-EU joint press release again, taking into account the above-mentioned background, we could assume that Denmark contributed to the debate within the EU in the same line as her discussion with Japan and vice-versa.  Of course, you could say it is a question of “which comes first, chicken or egg”.

On 18 and 19 June, the EU leaders discussed how to address the COVID-19 at the teleconference of the European Council. 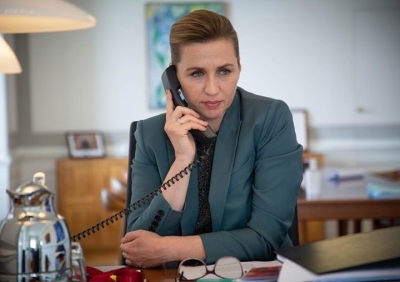 (Telephone call between Ms. Mette Frederiksen, Prime Minister of Denmark and Ms. Angela Merkel, Chancellor of Germany on 4 June. Photo: PM Frederiksen’s FB)
A joint letter signed by 6 leaders from Belgium, Denmark, France, Germany, Poland and Spain was dispatched to President of the European Commission ten days before the European Council.  The letter elaborated the need for stronger European cooperation in order to ensure better preparedness in Europe for future health pandemics.  For example, diversification of supply chain to produce medical gear, drug and vaccine was proposed in light of experiences with COVID-19.  Prime Minister Frederiksen stated such an idea when the European Council in April was held.  Therefore, I assume that 6 leaders’ letter had been well thought out and coordinated carefully with the other 5 countries by Denmark. 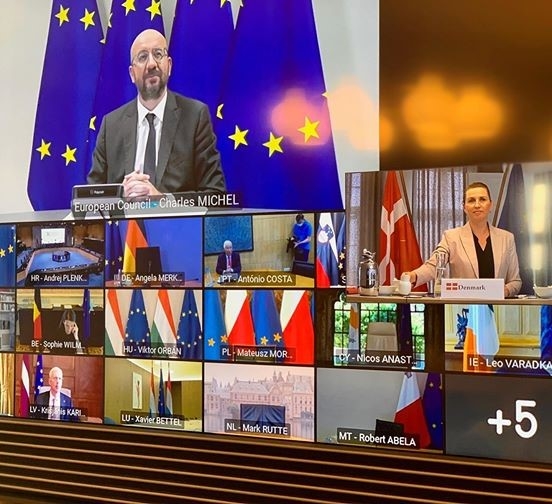 Japan has been reviewing supply chain including strengthened domestic production bases of medical gears such as masks and others.  I suppose that we can envisage future better preparedness against recurrence of pandemics among Japan, Denmark and the EU in partnership with like-minded countries in the world.
All the past and recent precedents indicate resonance between Japan-Denmark and Japan-EU collaborations. A typical Danish understatement is to begin one’s conversation by a few modest words, “Denmark is a small country.”  Japanese incidentally is familiar with understatement.  For example, we describe a full course Japanese dinner for Japanese guests by starting to utter “I am sorry tonight we have nothing to offer to you.”  In fact, Denmark has a solid vision to make her way through the argument in the EU together with persistent negotiation power, thus nurtured mutual trusts with like-minded countries.

Some might criticize the Danish recent position shared with Sweden, Netherland and Austria vis-à-vis the EU recovery fund proposed by France and Germany, saying “Denmark is not cooperative.”  I am not in the position to interfere the EU discussion on the matter, however, I understand that Denmark supports, and not at all opposes the fund, believing in the importance of EU solidarity in its recovery from COVID-19, however she believes that the fund should not be grant entirely, but loan for most part of it. 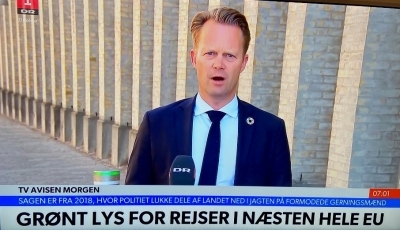 On 15 June, Denmark reopened her national border with Iceland, Germany, and Norway.  On 27 June, she further reopened the border with the EU countries except for Ireland, Malta, Portugal, Romania, and Sweden (reopened with part of Sweden ) .  Japan is preparing for reopening the national border with neighboring countries such as Vietnam, Thailand, Australia and NZ to begin with.  Next steps would be mutual reopening of the national borders with major trading partners from outside of one’s own region.  Both Japan and Denmark have so far succeeded in containing COVID-19.  I hope that we can proceed to prepare for an early mutual reopening to allow business (including artists) and other trips between Japan and Denmark.  It has been encouraging to see more Danish colleagues coming back to the office since the middle of this month.

To conclude, I sincerely wish your health, safety and security.  See you next month.


Embassy of Japan to the Kingdom of Denmark
Manabu MIYAGAWA