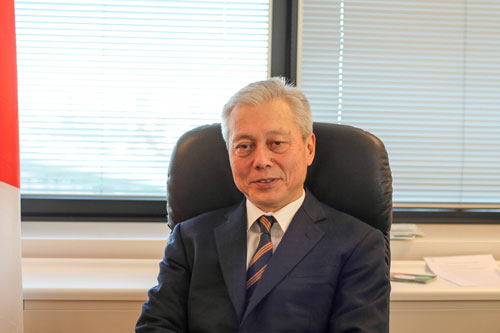 Japan and Denmark are celebrating the 150th anniversary of the establishment of diplomatic relations between our two nations.

With the close and amicable relations existing between the Japanese Imperial Household and the Danish Royal Household, our two nations have constructed remarkable partnerships with each other in a variety of fields. The fact that both our countries have prospered on the basis of democracy, free trade and navigation eloquently proves Japan and Denmark share a solid common ground at the core of the international community. Japan at the same time notes with great interest that Denmark has developed unique policies of its own particularly with regard to social welfare and renewable energy technologies. It is also a well-known fact that Denmark excels in agriculture and in a wide range of niche industries. Taking account of the above, there is no doubt that there is a huge potential to further enrich our relations.

In order to enhance the relations between our nations it is all the more crucial to deepen the knowledge of each other’s history, culture and societies. As various international developments are affecting the world order, the need to further understand each other as to how to tackle those challenges has become increasingly important. The relations between Japan and Denmark cannot be apart from such international situation.

As Ambassador of Japan to Denmark I feel honoured to be given the opportunity of working to further the Japan-Denmark relations and look forward to working with people of both our countries for that purpose.